The Power of the Holy Rosary

When you say your Rosary, the angels rejoice, the Blessed Trinity delights in it, my Son finds joy in it too, and I myself am happier than you can possible guess. After the Holy Sacrifice of the Mass, there is nothing in the Church that I love as much as the Rosary.

"Whatever you do, do not be lie a certain pious by self-willed lady in Rome, so often referred to when speaking about the Rosary. She was so devout and so fervent that she put to shame by her holy life, even the strictest religious in the Church.

Having decided to ask Saint Dominic's advice about her spiritual life she asked him to hear her confession. For penance he gave her one whole Rosary to say and advised her to say it every day. She said that she had not time to say it, excusing herself on the grounds that she made the Stations' of Rome every day, that she wore sack-cloth and also a hair shirt, that she gave herself the discipline several time a week, that she carried out so many other penances and fasted so much. Saint Dominic urged her over and over again to take his advice ans say the Rosary, but she would not hear of it. She left the confessional, horrified at the tactics of this new spiritual director who had tried so hard to persuade her take on a devotion that was not at all to her liking. 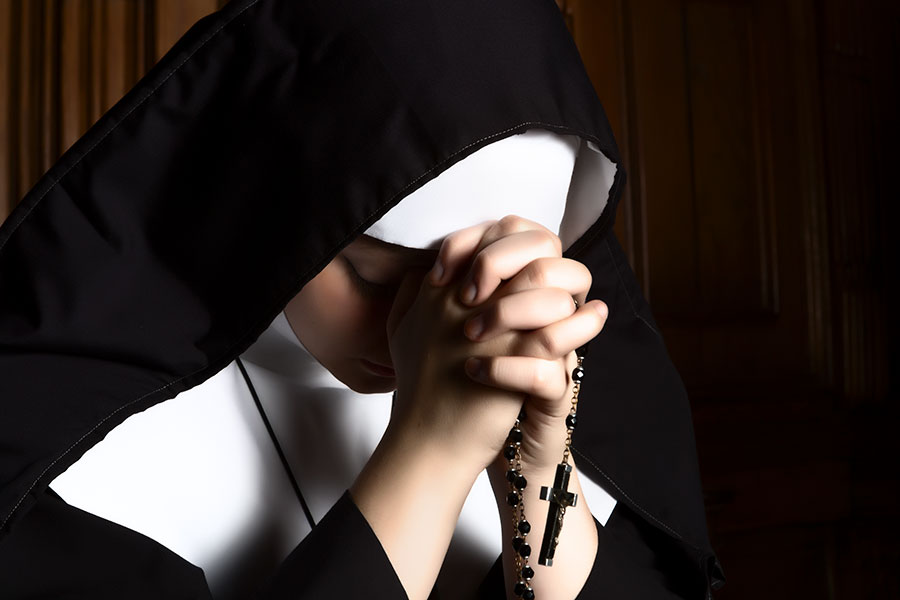 Later on when she was in prayer, she fell into ecstasy and had a vision of her soul appearing before Our Lord's Judgment Seat. Saint Michael put all her penances and other prayers onto one balance of the scales and all her sins and imperfections onto the other. The tray of her good works was greatly outweighed by that of her sins and imperfections.

Filled with terror she cried for mercy, imploring the help of the Blessed Virgin, her gracious Advocate, who took the one and only Rosary that she had said for her penance and dropped it onto the tray of good works. This one Rosary was so heavy that it weighed more than all her sins as well as all her good works. Our Lady then reproved her for having refused to follow the counsel of her servant Dominic and for not saying the Rosary every day.

As soon as she came to herself she rushed and threw herself at the feet of Saint Dominic and told him all that had happened, begged his forgiveness for her unbelief and promised to say the Rosary faithfully every day. By this means she rose to Christian perfection and finally to the glory of everlasting life.

You who are people of prayer - learn from this how tremendous is the power, the value and importance of this devotion of the Most Holy Rosary when it is said together with meditation on the mysteries.

Few saints have reached the same heights of prayer as Saint Mary Magdalene who was lifted up to Heaven each day by angels, and who had had the privilege of learning at the feet of Our Lord Himself and His Blessed Mother. Yet one day when she asked God to show her a sure way of advancing in His love and of arriving at the height of perfection, he sent Saint Michael the Archangel to tell her, on His behalf, that there was no other way for her to arrive at perfection that to meditate on Our Lord's passion. So he placed a cross in front of her cave and told her to pray before it, contemplating the Sorrowful Mysteries which she had seen taken place with her own eyes.

The example of Saint Francis de Sales, the great spiritual director of his time, should spur you on to join the holy confraternity of the Rosary, since, great saint that he was, he bound himself by oath to say the whole Rosary every single day as long as he lived.

Saint Charles Borromeo said it every day also and strongly recommended the devotion to his priests and to the ecclesiastics in the seminaries and also to all his people.

Saint Pius V, one of the greatest Popes who have ever ruled the Church, said the Rosary every day. Saint Thomas of Villanova, Archbishop of Valence, Saint Ignatius, Saint Francis Xavier, Saint Francis Borgia, Saint Theresa and Saint Phillip Neri as well as many other great men whom I have not mentioned were deeply devoted to the Holy Rosary.

Follow their example; your spiritual director will be pleased and if they are aware of the benefit that you can derive from this devotion, they will be very first to urge you to adopt it.

(Source: The Secret of the Rosary by Saint Louise de Montfort)